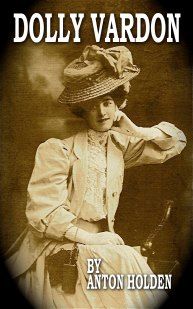 “I was bought as a slave and for a slave…” Dolly told her daughters at bedtime. “Your father never loved me.”

DOLLY VARDON is the true story of an orphan girl’s struggle to survive 19th century London and Paris. Born in Mary-le-bone Workhouse and left as a newborn in a Soho ‘baby farm,’ Dolly told her daughters of her life as an orphan: dancing in the streets to the music of the hurdy-gurdy men, begging, stealing and the dark side of Victorian England – one of the most horrendous eras of prostitution in the modern world.

A chance encounter brings Dolly – poorest of the poor – together with the wealthy publisher, Harry Sidney Nichols, uncrowned king of Victorian and Edwardian clandestine erotica, books of every know variety of sexual diversion and perversion – at a time when publishing and selling erotica is highly illegal. This unlikely couple is bound by Harry’s fetish – the foot and shoe. Pulling herself up by her tiny bootstraps, Dolly becomes Harry’s greatest treasure. Harry buys Dolly to be his teenage ‘ward,’ introducing her to a world of luxury she could not have imagined. But there is a price. And it haunts Dolly through three generations of a dysfunctional family saga.

“Holden delves into his family’s secrets in a sweeping, novelistic biography spanning continents and generations… vividly recreates the cities of London, Paris and New York City through the decades… Dolly’s tale is one of success and tragedy, and Holden’s biography honors the resilience of a young women who rose out of the slums, charmed and bribed her way… and reinvented herself as a successful businesswoman. With clear-eyed candor, this biography brings a family’s extraordinary matriarch to life.” [Kirkus Reviews]